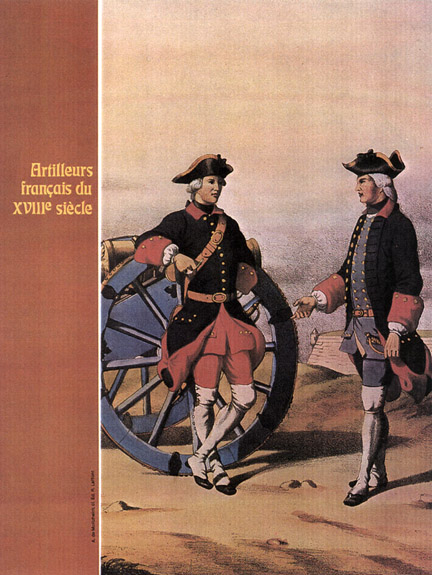 The cannoniers were part of the colonial troops. In Canada, the first company specializing in artillery was formed in 1750. In the beginning, there were only 50 cannoniers and four officers per company. Two of the officers: Mr. Le Mercier and Mr. Lusignan, testified that "Lazare Bolley said St-Lazare, 17 years old from Burgundy" had been a member of the company since his arrival in Canada in the summer of 1751. Hospital records in the following years indicated that he was a member of the company until 1759.

The cannoniers were granted "special status": a distinctive uniform, wore moustaches, positioned on the right during parades, etc. Its members were chosen from the best and the tallest soldiers from the other companies of colonial troops and then received special training.

The cannoniers participated in almost all the military operations in all points of New-France. Historians mention in particular, their victory in the battle of Carillon in 1758, a great military expedition conducted by Commander Montcalm.

This company was increased to 70 men in 1756, increased again an divided into two companies of 50 men each in 1757. Mr. Le Mercier remained as captain of the first company and was named commamder of the entire artillery. The second company, that Mr. Lusignan joined as lieutenant, was commanded by Captain de Montbeillard, private secretary to Marquis de Montcalm. The historian, Jacques Lacoursière, mentioned that it is this second company that helped Montcalm's troops on the Plains of Abraham. The first company stayed at Beauport, where they had spent the summer, and had repulsed the attempted landing of British troops in July.

After, we find cannoniers on the frigate Le Machault who returned to France in the autumn of 1759 and among the victorious troops from Lévis to Ste-Foy in 1760. In the following years, we find them in the colonies of Louisiana and Guyana. We find that Mr. Lusignan spent his last years as governor of Guyana.

Finally, some stayed in Canada and founded families; such is the case with Marc Charpentier, fellow soldier and friend of Lazare Bolley. Having both worked in the same company and possibly on the same team of 8 cannoniers around the same cannon, it would have been nice if the story of Lazare ended here like the story of Charpentier said La Giroflée...BUT.